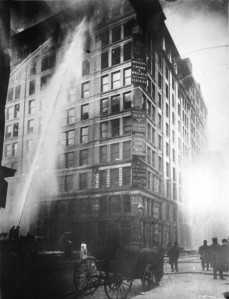 The people are what matter to government, and a government should aim to give all the people under its jurisdiction the best possible life. –Frances Perkins

This month marks the anniversary of the Triangle Shirtwaist Factory fire in Manhattan, New York City on March 25, 1911. It was the deadliest industrial fire in U.S. history killing 146 workers, mostly immigrant women under the age of 25. The event was a catalyst to create laws that enforced minimum standards for safer working conditions.

The garment factory was located the eighth, ninth, and tenth floors of the 10-story Asch Building on the northwest corner of Greene Street and Washington Place, just east of Washington Square Park, in the Greenwich Village. The employees worked 52 hours a week including a 7 hour shift on Sundays for between $7-$12 a week. They toiled in a sweatshop environment, crowded in among electric machinery and surrounded by flammable materials.

The fire started from a spark or a careless cigarette into a waste bin. The factory was littered with scraps of cloth from weeks of production. There was no fire alarm, no sprinkler system (too expensive), and one of the main exits had been locked by the owners to prevent union leaders from entering the factory. No laws yet existed to protect the workers from such dangerous conditions.

The fire ignited and quickly cut off the only other stairwell leaving only a small, flimsy iron fire escape outside and a freight elevator. The heat and weight of people trying to escape soon disabled both escape routes. Twenty women fell to their deaths when the fire escape collapsed. The ladders of the fire trucks could only reach the 7th floor. People below could only watch as 62 workers chose to jump rather than burn alive. Their bodies lined up on the sidewalk side by side where they fell.

One of the horrified witnesses below was 31 year old Frances Perkins. Originally from Boston, Frances was a highly educated teacher and political activist. The Triangle Shirtwaist Fire became a pivotal moment of her life and she devoted the rest of her career to helping American workers. 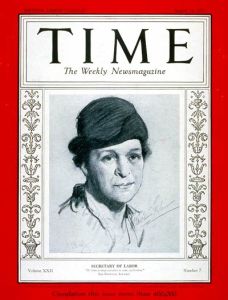 Frances was appointed as the inaugural Commissioner of the New York State Department of Labor by the newly elected Governor of New York State Franklin Delano Roosevelt in 1929. When FDR was elected president three years later he asked Frances to join his cabinet as Secretary of Labor. She was FDR’s longest serving cabinet member and a close personal friend. She was the first woman to be a member of a presidential cabinet.

The door might not be opened to a woman again for a long, long time, and I had a kind of duty to other women to walk in and sit down on the chair that was offered, and so establish the right of others long hence and far distant in geography to sit in the high seats. – Prances Perkins

Together Frances and FDR created some of the most effective agencies and laws to help the American people; the heart of FDR’s New Deal and Social Security: minimum and overtime wages, unemployment benefits, workplace safety standards, child labor laws, the 40 hour work week, protection for labor unions, and championing the rights of women in the workplace. She told reporters, “I came to Washington to work for God, FDR, and the millions of forgotten, plain common workingmen.”

When World War II overtook FDR’s attention Frances became “FDR’s moral conscience” keeping the goals of the New Deal alive as the United States entered the greatest industrial expansion in history. I like to think that the workers who perished in the Triangle fire of 1911 did not die in vain because they inspired the public to demand change and they inspired the remarkable Frances Perkins to devote her life to see those changes made into law. 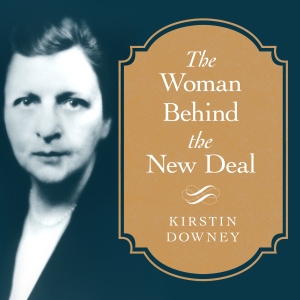 You can read more about Frances Perkins in Kristen Downey’s The Woman Behind the New Deal narrated by Susan Ericksen, audio releases April 12, 2016. Perkins also wrote an excellent memoir about her friend and President, The Roosevelt I Knew published in 1946.