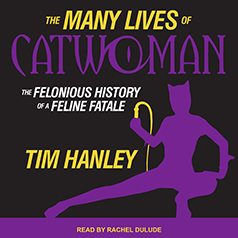 or more than seventy-five years, Catwoman has forged her own path in a clear-cut world of stalwart heroes, diabolical villains, and damsels in distress. Her relentless independence across comic books, television, and film set her apart from the rest of the superhero world. When female-led comics were few and far between, Catwoman headlined her own series for over twenty years. But her unique path had its downsides as well. Read the full description.

“Feed your kitty now, because once you start reading, you won’t be able to stop. Tim’s words are as mesmerizing as Catwoman herself.” —Adrienne Barbeau, actress and voice of Catwoman in Batman: The Animated Series